The Typing Man, a story in Turkish and English, was developed at the Bluecoat into an immersive project called The Typing Man and the Turkish Woman. 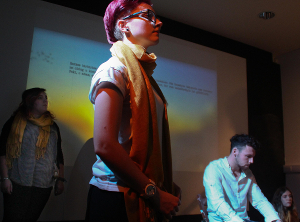 Actors from Liverpool Hope were set a challenge: To engage multiple audiences, both seated and passers-by, bringing out key themes in The Typing Man book. 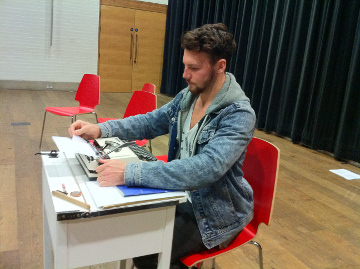 The actors began to develop movement and sound ideas to convey the essence of the printed text, including:

– how to convey meaning through another language (Turkish)

– secrets and perceptions, public and private

– hubbub of Istanbul and tourist places 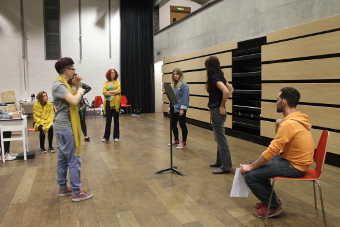 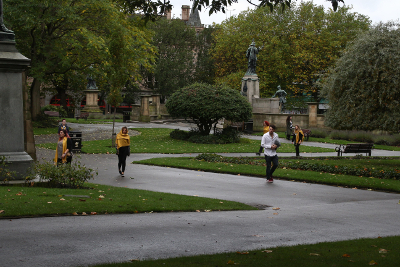 Experimental outdoor performances on the way to Central Library involved rides on long escalators and calling in to shops from bookies to M&S.

We witnessed hundreds of double-takes and enquiries along the lines of: ‘What’s happening?’ ‘What are you doing?’ We had a total audience of over 8,000 people. 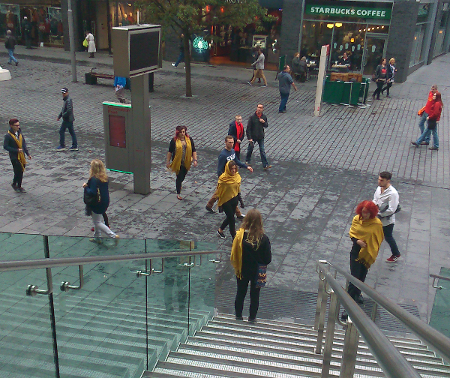 On arriving back at The Bluecoat the troupe delivered a dramatised book launch incorporating digital sound and imagery in front of a seated audience. 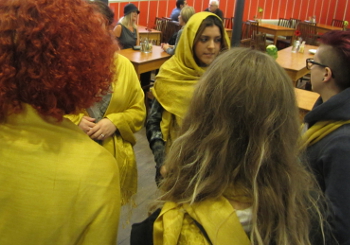 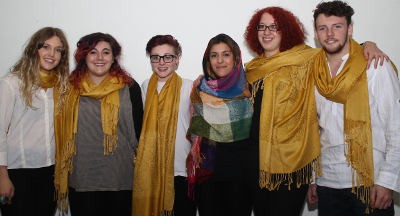 In the morning at Central Library writers from Blackburne House read fiction that was produced in a parallel community project. The women’s imaginative letters were inspired by ideas in The Typing Man.

– Marguerite’s letter was written by a fictional mother to her daughter as the monolith of the Berlin wall rises between them in 1961. Her starting point was the Turkish-Arabic name Dünya [pronounced DUNE-YA] which means World.

– Liz’s letter to a Liverpool eye surgeon deals sensitively and humorously with the notion of being partially sighted. The name she began with was Güneş [pronounced GOO-NESH] which means Sun.

– The hilarious plea from an aspirant Everton football player was based on the theme of Desire – Murat [pronounced MOO-RAT].

Listen to the Blackburne House writers performing four of their newly-created letters in this 10-minute clip:

After listening to the audio, study the photo in Debbie’s hand (she is sitting on the far left of the photo below)

In the afternoon, letter-themed Explore activities for families lead by Betty at The Bluecoat launched conversations with participants and volunteers aged from three to grandparent. 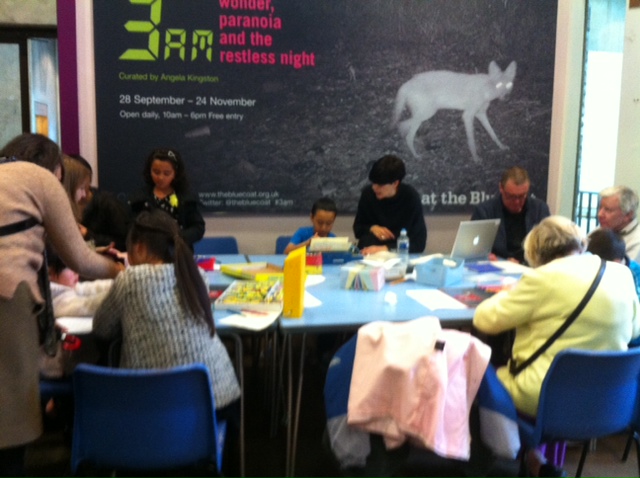 Here’s a 2-minute clip from the session which included the solving of the name puzzle Anna and Anya:

In this just under 3-minute audio clip, the actors are talking about the character interpretations and rehearsals:

Final touches being made to the performance

The dramatised book launch in the evening. 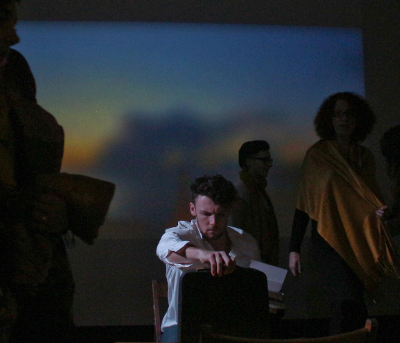 Lighting by Tom Smith and Nathan’s digital projections and soundscape conveyed the hubbub of the Istanbul park where The Typing Man story is set, together with the emotional import of what happened there.

A letters conference at The Portico Library was the setting for an impressive sweep across several centuries of epistolary fare.

Talks moved from Professor Melanie Williams’ on letters in law and literature to Rachel Bower’s detailed look at contemporary Bengali and English speech in Monica Ali’s novel Brick Lane – relevant to the Urdu-English speech in the novel from Pakistan to Preston.

Jenn Ashworth discussed digital exchanges, while insights into the poet Wendy Cope’s email archive at the British Library were presented by Sophie Baldock. 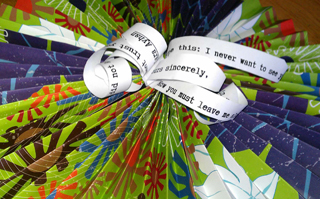 The Typing Man ‘Yours Sincerely’ fan, in The Portico Library’s conference exhibition

A.T. Boyle spoke on the subject of using letters as a device to shock readers in fiction. She referenced the Costa award winning Set in Stone by Linda Newbery and examples from The Typing Man.